Bitcoin whales refuse to give up their holdings amid recent rally

The world’s largest cryptocurrency Bitcoin (BTC) has made a strong move to $45,000. As of press time, Bitcoin is trading at $44,934 with a market cap of $842 billion. Over the last two weeks, Bitcoin has registered a strong bounce-back leading the crypto market rally.

Interestingly, it turns out that Bitcoin whales have been getting stronger and accumulating more. Bitcoin’s millionaire-tier whales i.e. the addresses holding between 100-10,000 Bitcoins have significantly increased their holdings over the past week.

Bitcoin millionaire addresses holding between 100 and 10,000 $BTC aren’t showing profit taking signs on this surge we’ve seen over the past couple weeks. These holders hold a combined 9.23M $BTC now, which matches their #AllTimeHigh held on July 28.

However, with the recent price surge, Bitcoin’s daily address activity climbed above 900K. If the number of unique addresses interacting on the Bitcoin blockchain crosses 1 million, it will signal a bullish resumption.

On the other hand, thousands of bears have faced brutal liquidations amid BTC’s price weekend surge to $45,000. As per the current data on Bybt.com, over 91 traders have liquidated their positions worth a massive $350 million, in the last 24 hours. The largest single-person liquidation happened on OKEx-BTC for $2.29 million.

While the Bitcoin price surged all the way to $45,000, physical commodity Gold witnessed the largest drop in its prices on Sunday, August 8. the good prices have crashed to a six-month low crashing all the way under $1,700/oz.

The gold price is down by 8 percent year-to-date and nearly 15 percent down over the last year. Here’s a look into how the world’s two very popular assets have been showing inverse correlation. 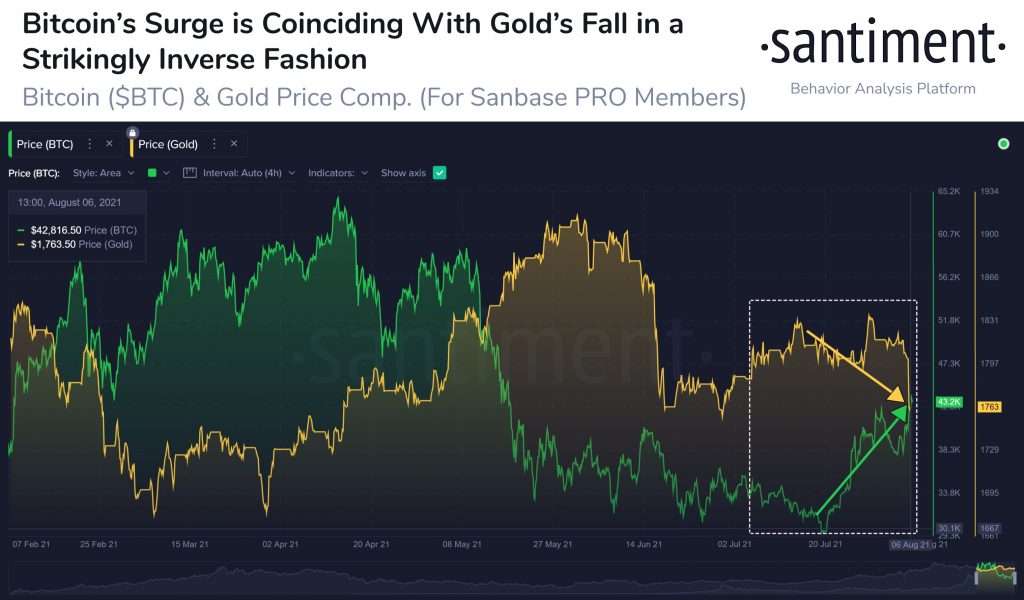 Explaining the reason behind the sinking Gold price, popular trader Peter Brandt explains: “The leverage in the futures market for trading Comex (CME) Gold is about 15 to 1. Thus, a leveraged position can get into serious trouble with the type of decline experienced on Friday — resulting in forced liquidation on Sunday’s open”.

While the BTC whales have continued their accumulation over the last few weeks, the overall spending hasn’t increased. On-chain data provider Glassnode mentions:

Despite a strong rally to $45k, the Bitcoin market still has not seen a significant increase in old coins (> 1y) being spent. This is very different to the 2018 bear market where old hands took exit liquidity on most relief rallies.

This clearly shows that BTC holders are still not interested in parting their holdings. This is a bullish indicator. On the other hand, Glassnode data also shows a 30 percent surge in the overall Bitcoin address activity.

Here Are the Top Three Altcoins To Watch This Month, According to Crypto Analyst Jason Pizzino