The cryptocurrency market has shown a strong bounce-back gaining 6.5 percent over the last 24 hours. But one altcoin that’s delivered outstanding returns is Litecoin (LTC).

In a surprise move, the LTC price has shot up 27 percent as of press time and is trading at $79.00 with a market cap of $5.6 billion. With this recent move, Litecoin has surged past both – Solana and Shiba Inu – to become the 13th largest cryptocurrency by market cap. Similarly, the 24-hour trading volumes for Litecoin have also jumped by nearly 200 percent shooting to over $2.18 billion.

While most of the cryptocurrencies have been trading in the red, Litecoin has outperformed all big players with 37 percent weekly gains. In fact, it’s not only the last week! LTC has outperformed the entire crypto space since June this year.

Since June #litecoin out preformed the entire #crypto market.
No bailout, no downtime, no VC, no premine, no ICO.
Just true decentralization. https://t.co/Jyn98dYABb

Much recently, Bitcoin evangelist Michael Saylor also compared Litecoin to Bitcoin. Saylor said that Litecoin is just a commodity similar to Bitcoin. This comes at a time when the U.S. Securities and Exchange Commission (SEC) has been going after every big cryptocurrency in the market and running it through the Howey Test to determine whether it’s a security or not.

Additionally, the world’s largest crypto payment processor BitPay also added support for Litecoin earlier this year. Since then, Litecoin has surpassed every other altcoin in the market in terms of transaction market share. Only Bitcoin is above LTC in this regard.

Litecoin was added to the largest crypto merchant professor, @BitPay, *after* most of the other coins on it were.

Litecoin is now taking significant transaction market share from all of them, following Bitcoin. pic.twitter.com/eUNK8X5HJ8

Litecoin whales are back in action

One of the major reasons behind the current LTC price action is strong whale activity. On-chain data provider Santiment reported:

Also, since November 2, the largest whale cohort holding one million to 10 million coins increased their bags. This cohort alone added 2.4 million LTC to their bags. 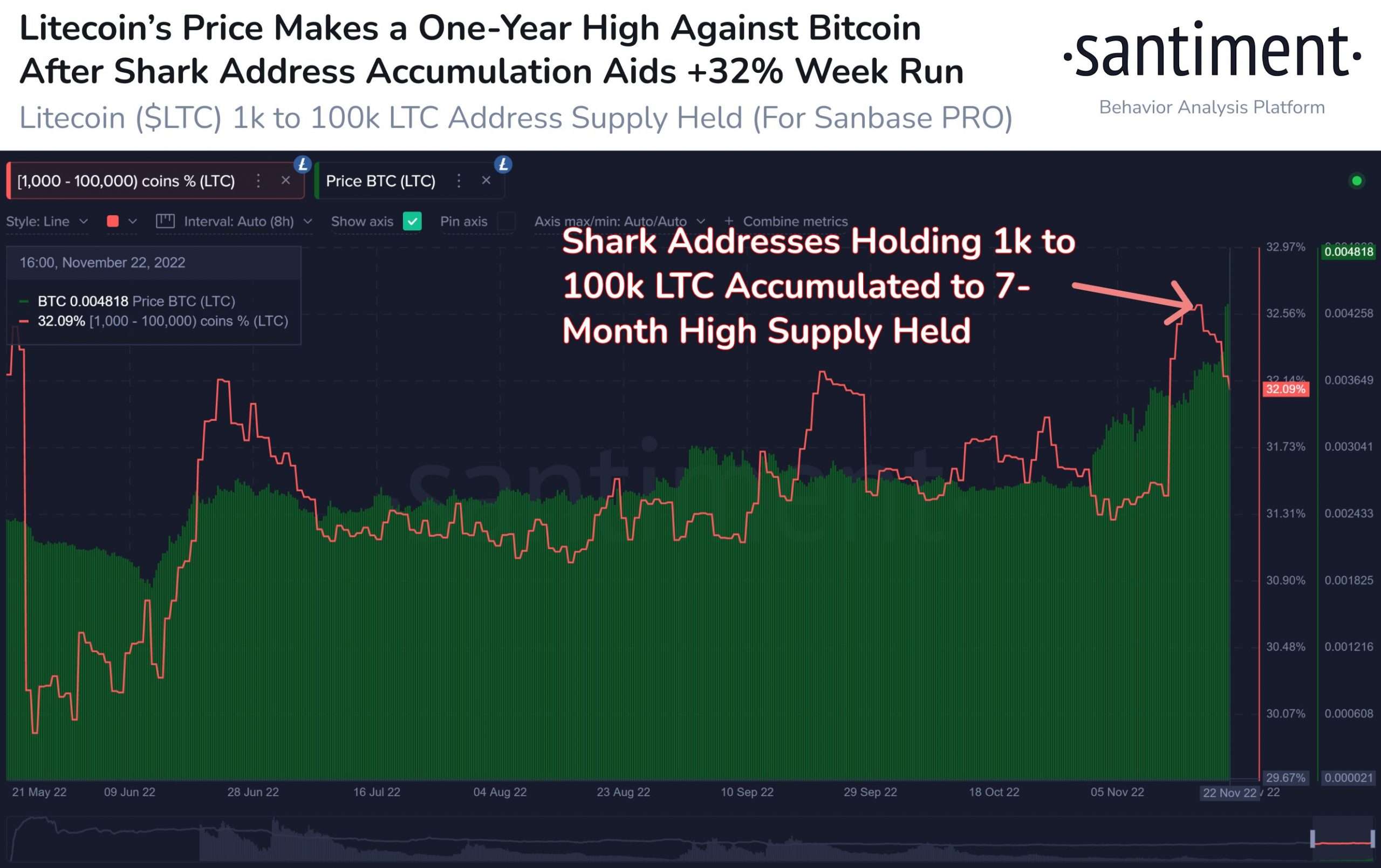 Also, as per on-chain data, Litecoin’s 30-day MVRV (ratio of market value to realized value) has surged above 15 percent hinting at a bit of a danger zone. Thus, we can expect some cool-down in the LTC price going ahead. But the Santiment report notes:

The 365-day MVRV reveals that long-term traders are FINALLY back in positive territory for the first time since December 2nd, 2021. This key turning point could actually signal some short-term optimism that may fuel a price rise after the shorter term trading returns settle down slightly.

Another reason behind the renewed bullish sentiment in LTC is the upcoming reward halving scheduled eight months from now. This is the third-halving event for Litecoin and could bring a positive change in LTC’s supply dynamics.

What Needs to Be Improved in the Metaverse, So That People Start Using It?

Dogecoin Slides To Support Of $0.11; These Indicators Point To Bearish Weakness