Bitcoin moves sideways, will the price buckle under the bears’ pressure?

The Bitcoin price continues to trend lower. At the time of publication, BTC was trading at $56,561 with losses of 1.4% in the last 24 hours. On the weekly and monthly charts, BTC registers losses of 3.8% and gains of 8.1% respectively.

Despite that, trader Josh Rager remains bullish as long as the price continues to form a compression pattern. In that regard, he expects further momentum toward the resistance zone at $60,000 by mid-April. However, he does not rule out future pullbacks.

Rager added that a compression pattern usually leads to an “expansion” in price. This can be to the upside or downside, the trader replied the following to a user:

Expansion could also be down mate. So you could be right, I assume we have a decent month. Every time we pullback, its the end of the market ppl say and each time we keep pushing. Yet to see.

Bitcoin price far from the top

The current price action seems to have investors questioning the sustainability of the uptrend which has extended since March 2020. However, the fundamentals support an extension of the bull-run and further appreciation for BTC.

CryptoQuant CEO Ki Young Ju argues that when the bull-run reaches its top, BTC inflows on exchanges will increase. So far, this metric sits at its lowest levels in about three years. Yong Ju stated:

(…) inflow addresses across all exchanges was at its highest in 2018 Jan, while it hit a three-year low a few days ago. People are holding, not selling

Economist Alex Krüger contributed to the bullish case by analyzing the full picture for the market. Acknowledging that there is a “mania” phase towards NFTs and other sectors, Krüger is bullish about the approval of a Bitcoin ETF and the launch of Coinbase’s IPO. Krüger added:

Finally, analyst Willy Woo has shown Glassnode data to indicate the percentage of BTC supply that has become “illiquid.” As the chart below shows, since the end of January this year this percentage has increased significantly. Therefore, a decrease in selling pressure on BTC can be expected which will favor its price. 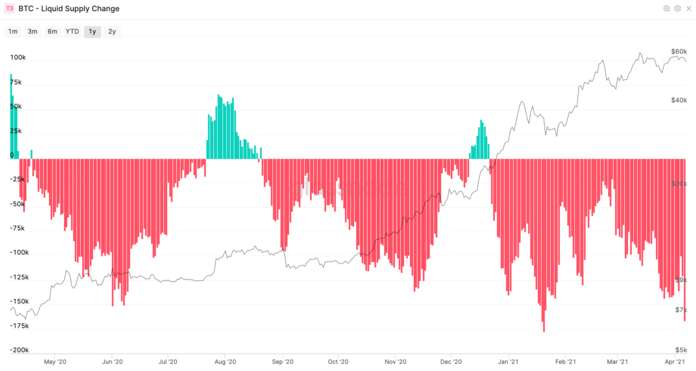 Selling Unregistered Securities is a Made up Crime